A WordPress LAMP?! An Introduction to WordPress Infrastructure

This article introduces one of the most foundation topics in WordPress development: the server-side software that makes WordPress work. Often referred to as “the stack,” as this article explains the “LAMP stack” that most WordPress sites run on is just an initalism of the software packages of Linux, Apache, MySQL, and PHP. And that stack is just as useful today as it was 15 years ago when WordPress started.

If you like this chapter, check out Up and Running. There’s about 40 more chapters where this one came from.

Get Up and Running Today! 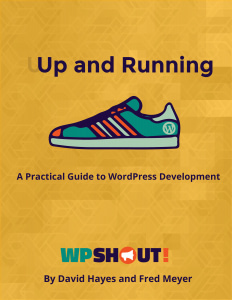 Here's what one of them had to say:

Get Up and Running Now

Here, we’ll look at how WordPress actually presents pages to the Internet. Our goal is to get a basic understanding of the infrastructure that underlies your WordPress site.

What is the LAMP Stack?

LAMP is an initialism that stands for: Linux, Apache, MySQL, and (in this case) PHP. Let’s explain each of those individually. We’ll go in reverse order, since it’s actually easier to understand that way.

Using PHP as a Part of the LAMP Stack

PHP is necessary for WordPress. The computer that’ll host your WordPress site simply has to be able to parse and execute PHP code. If it can’t, you don’t get to run WordPress.

PHP isn’t the only P-language that can be used in a LAMP stack. Initially (in the 1990s, when this whole thing was new) it commonly stood for Perl, and also sometimes for Python. For our purposes, though, the “P” means a server that runs PHP—the main language of WordPress themes, plugins, and WordPress itself.

MySQL as Your Database

WordPress needs a place to store data. For this it uses a relational database management system (RDBMS) solution called MySQL.

MySQL was the first, and is still the most popular, free software RDBMS solution. It remains the go-to for many types of applications, for both practical and historical reasons.

Apache is HTTP web server software. To oversimplify its job: Apache receives requests from other computers—sent using the standardized “handshake” that is HyperText Transfer Protocol (HTTP)—and delivers back HTTP responses of its own. When you enter a URL into your browser, server software is what interprets that request, and hunts for and gives you back the right resource.

For a long long time, Apache was the only web server software that anyone used or cared about. That’s changed in the last few years, but it’s still the biggest, and it’s what your WordPress site is likely being served with. (Nginx is the Apache-alternative most clearly growing in popularity. So some people are proud to run their sites on a “LEMP” (the phantom “E” on “(E)ngine-X” being used to make the word pronounceable) stack.

By far the most common way a WordPress developer will interact directly with Apache is through an Apache-only file called .htaccess, which can be used, for example, to redirect one URL on your site to another. Other than that, Apache is “in the background” for most WordPress programming tasks. If Nginx is used, .htaccess files will have no effect. But other than that, the rest of WordPress stack will be the same.

Linux: The Operating System under Everything

The specifics of what “Unix-like” means, what an operating system is, and so forth aren’t that important. What you actually need to know is simply that the other three pieces of the stack—your (Apache) web server, your (MySQL) database, and your programming language (PHP)—ride atop the operating system. And if those three work, WordPress works.

By the way, Linux is the most commonly substituted piece of the WordPress LAMP stack: If you’ve ever heard people mention developing WordPress sites locally (on their own computers) using “WAMP” or “MAMP,” that’s how: Windows and Mac OS work fine as server operating systems. Assuming everything else is in order, you can run WordPress on a server with any OS, and that’s what people who create private servers on their own Macs or PCs are doing.

What It All Means

For most WordPress development uses, every piece of the LAMP stack except PHP runs unobtrusively in the background. Still, it’s very good to know a bit about the technologies that underlie and power WordPress. We hope this quick tour gives you the basis you need to learn and explore more.

Linux, Apache, MySQL,
And PHP may have no equal.
Call them “LAMP” and you
Find folks understand you.
(At least, just about any geek will.)