Like nearly a hundred thousand others last week, I was very interested to see John O’Nolan’s concept of a simplified blogging platform, Ghost.

And like quite a few of those others, I really liked John’s ideas. He suggested things like totally revamping the Dashboard so that it’s “like your iPhone home screen”; adopting an email client split-view approach to managing posts and — my favourite bit — “a new writing screen that actually makes sense for blogging”. I’ll come to that in a bit. 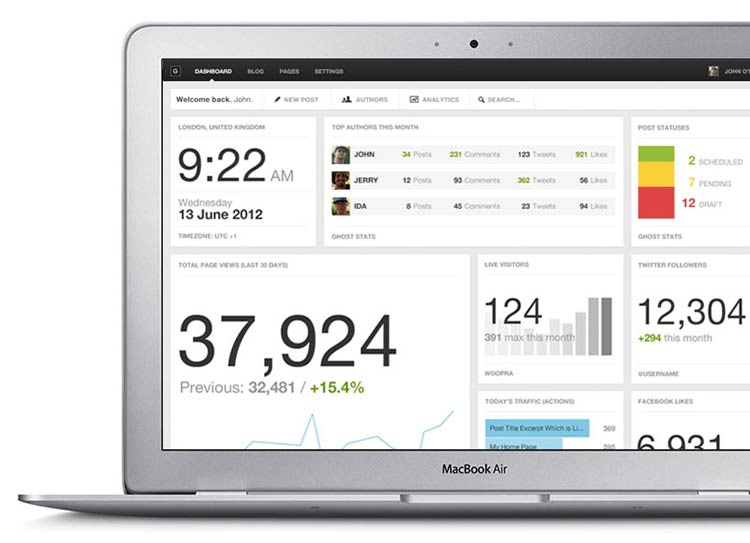 The main idea of Ghost is to tailor-make a blogging platform that does blogging, and blogging only. WordPress is, without a doubt, a fully-fledged content management system, but it seems it’s always been fighting to be accepted as so.

Back when I started WPShout three and a half years ago, articles entitled “how to use WordPress as a CMS” were all the range. That time — from WordPress 2.6/7 – 3.0 — was when WordPress made a big shift from blogging platform to CMS. A new Dashboard, custom post types and arguably premium themes were the big drivers of change. 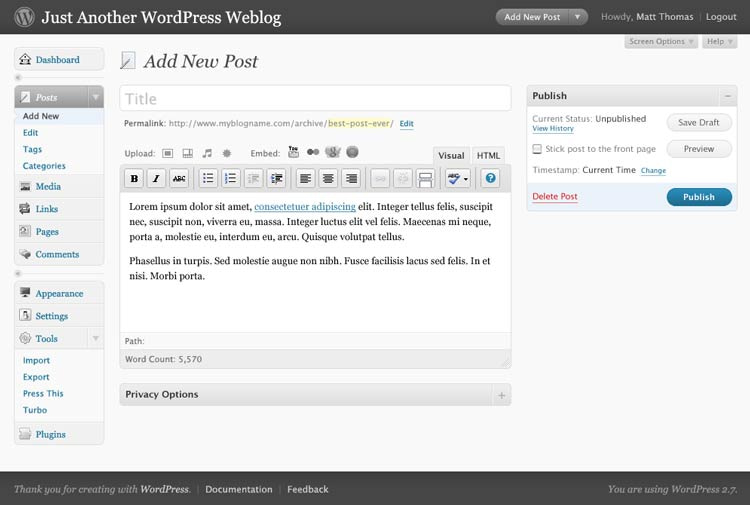 And we, as a community, embraced that change, because the new features were, without doubt, awesome! The new Dashboard in 2.7, released nearly four years ago, is largely the same thing that’s in use today. A lot of people have gained a lot financially from premium themes,  myself included, and things like custom post types were the icing on the cake.

But here’s the thing. Whilst WordPress is fantastic, as a blogging platform, it’s not actually particularly ideal. Whilst it does everything you could possibly want, the pure scope of the more advanced features means when you just want to sit down and write, there are a thousand and one things to distract you.

John suggests a writing screen that “makes sense for blogging”. How does it do that? A split screen view which has markdown on the left and a live preview on the right, with the idea being you can spend less time writing out HTML to get your post displaying how you want, and more time just writing whatever comes to you.

And like me, it’s quite possible you’re reading this thinking this looks fantastic. Ghost has great looking UI, wants to do things like build in the plugins that everybody uses and even wants to be “free as in Mozilla, not [free] as in Automattic.”

My problem, then, is that a bit like an Apple fan, I’ve taken one look at a new idea and immediately thought that looks amazing when can I have it. I’ve then written a blog post telling my readers how wonderful this new concept is.

And I can’t help but think it looks just a little bit like I’m having a good old moan at WordPress, something I’m not really too entitled to do. John served as Deputy Head of the WordPress UI Group  on versions 3.0 and 3.1. He’s gone out and crafted the entire idea and made the designs to back up his ideas. What have I done? Well, not much really in the grander WordPress scheme of things.

WordPress has done absolutely brilliant things for me and I can’t help but feel a little hypocritical for thinking Automattic shouldn’t really be making $45 million a year (source) off free software, but I should be able to make an income off the same free software without paying a dime in due, royalties, whatever.

And, then, I can’t help feel like I’m just moaning for suggesting WordPress suddenly isn’t suitable for my needs when I’ve not done anything to try and address these issues myself.

So what do you want, then?

So what do I want? Matt said:

I really like some of the things John has done in his mockups here, especially on the write screen, and contrary to what he thinks ideas like this are more than welcome in the WordPress community.

But I don’t know to what extent this is actually true in practice.

The Great GPL Debate created a with-us-or-against-us WordPress community which — I think — has prevented ideas like this coming forward in the past and will continue to do so in the future.

People like John can say these things because they’ve made the core contributions and given up their time for WordPress, but people like me? Sure, I’ve got opinions, but the barrier to entry is so high when it comes to submitting to core or the like, that whilst I have some skills, they’re nowhere near good enough.

And if I’d published a concept for a blogging platform? I’ve not got the skills to create awesome mockups and I’ve not contributed too much to the WordPress platform, so I expect I’d be told to do these things for WordPress or shut up and stop moaning — and in a community where you’re with-us-or-against-us, I wouldn’t want either me or my blog labelled as one of the black sheep.

So what do I want? I’d like the WordPress community to open itself up to more ideas like this, but embrace the thoughts of everyone, not just those with the skills to flesh out every single detail of what they’d like to see.