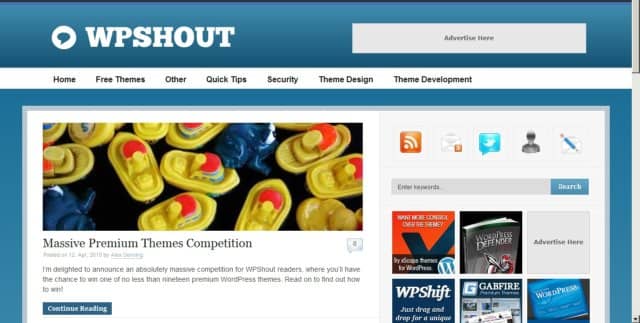 Well this is exciting! [wp] is now sporting look number three. The third incarnation of the site is quite a bit different from the last.

First off, it’s wider. Massively wider, filling up a 1280 screen, something that over 90% of readers have — I decided that as the overwhelming majority have screens with large (normal?) resolutions it was worth it as I’d be able to fit more stuff in the sidebar and have a wider content area, always good for putting lots of code in 🙂

Next up is that the site now sports a number of CSS3 gradients in the — one for the header background and the second as the content background. That does mean the site loads without a single image used for backgrounds. For the three visitors who use IE, you get a solid colour throughout the whole background which looks fine. I think it’s a fairly good example of progressive enhancement and all that jazz.

The increased width of the design does mean that there is a new ad spot open in the header so if you want to promote your product to a great audience then check out the BSA page.

You might have noticed the ‘Free Themes’ section of the navbar too. That’s where I’m going to be releasing a number of really simple but quite nice themes (and getting rid of the horrible ones there at the moment!) in the new WPShout “Theme House”. I’ve got two lined up at the moment which I’ll be releasing over the next couple of weeks.

I’ve had a couple of people ask if the new design is based on a Woo theme. Simple answer is yeah, I did take one of their themes as a starting point. Long answer is that I took one of their themes, completely stripped it down and rebuilt more or less the entire backend of it, using some pretty cool functions I’ll be sharing over the next couple of weeks. If I’m honest, I was pretty surprised how bad it was! The optimisation for both load times and search engines was poor to say the least with no sprites or the like and using a zillion background images and divs to achieve the overall effect of the theme.

I’ve also split content up into more sensible and smaller categories, as you’ll see in the navbar — the two categories I had before were a bit pointless and hopefully it’ll now be easier to find the content you’re after.

So there we are. New design. What do you think?