As you may have seen in last week’s competition post, I recently created an email newsletter for WPShout. You may have also noticed I ended up using MailChimp instead of a built-into-WordPress solution.

Something which used just WordPress was what I was originally after, so I set out the following criteria:

It turns out this was a fairly comprehensive list of criteria and it wasn’t possible to fulfil all of the criteria.

This left me with two options:

In the end I went with MailChimp as I didn’t want to sacrifice functionality and it’s not too much of a hassle to send emails out from. I went for MailChimp over Aweber simply because I’m familiar with it (and it’s free!).

One of the things I wanted to be able to do was create something similar to what the likes of Darren Rowse on ProBlogger use — a little modal popup which shows to first time visitors inviting them to signup to the newsletter. I initially tried to do this plugin-less, but it didn’t turn out well and so I ended up using a plugin called WP Super Popup, which essentially does the same thing as the Popup Domination plugin on ProBlogger, just there aren’t pre-designed forms. 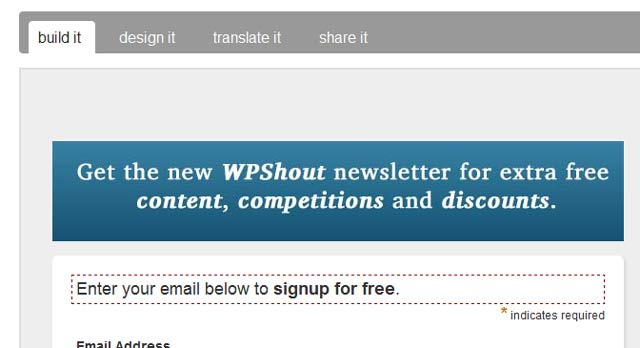 Not having pre-designed forms was fine, though as I wanted to show my MailChimp signup form which I embedded by using an iFrame (as there’s no embed code for larger forms on MailChimp, oddly). Obviously I don’t have any historic data to go on, but so far the popup has accounted for 1/3 of new subscriptions, so seems to be doing relatively well.

Signing up in the sidebar

The other thing I wanted to do was set up a sidebar subscription form. This too was relatively easy — I just grabbed the embed code off MailChimp and pasted it into the sidebar. I did then do a couple of tweaks though — instead of adding another stylesheet to Shout by using MailChimp’s stylesheet on its CDN, I put it at the bottom of Shout’s. I then had a play around with the styling to make it look like the rest of the site, moving the buttons around so they fit in Shout’s lovely uber-wide sidebar.

It’s been a fairly straightforward process setting up the newsletter — there were times when I had no idea what I was doing, but it all seems to have turned out well in the end! I’m now going to tell you to go and subscribe, of course. If you’re quick, there are hundreds of themes to be won, too!