I recently added some social media sharing buttons to WPShout via a plugin, something I thought I’d never actually do.

My reasoning behind this logic was simple: I assumed if people wanted to share my posts, then they would do so and use whatever way they preferred — a tool like Buffer, a browser plugin or just posting the link manually. 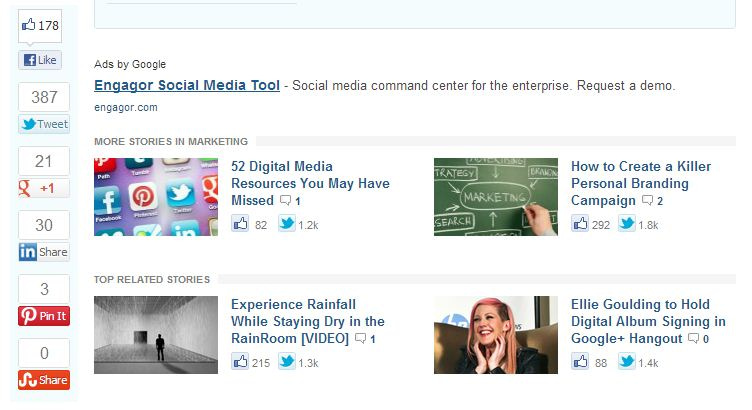 Sharing buttons in action on Mashable

I didn’t think I needed to prompt people to share posts, but it turns out, I was wrong.

It is, of course, simple marketing: you put a button prominently on your site and people are going to click it, they’re going to share your post. Which is great!

What’s even better is that more original theory that people were going to share the posts using whatever method they preferred still stands — the social buttons only actually account for about two thirds of shares any single post gets. The remaining third are ones people have done manually.

So those buttons are redundant, then? No – they just serve as a clear visual reminder that sharing this post on Twitter, Facebook is actually a great idea. 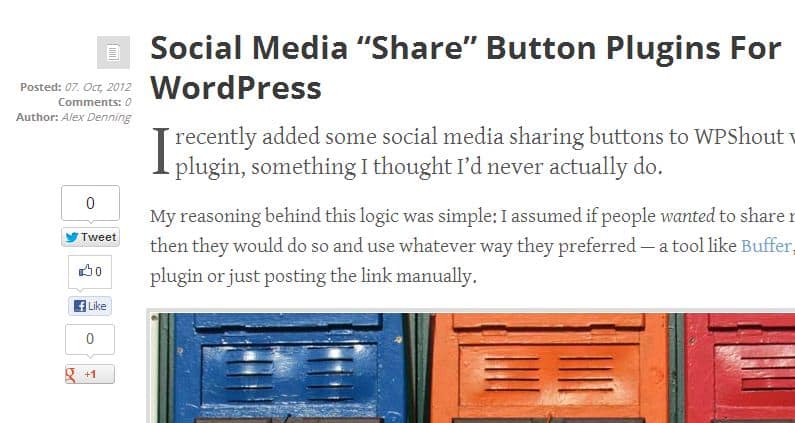 As long term WPShout readers will know, I’m a big advocate on only using plugins when you absolutely have to. Here, you don’t really need to use a plugin, but the sheer number of excellent plugins means that I’m very happy using one anyway.

The plugin I went with and the one I’d certainly recommend you go with is called Digg Digg.

It’s one I’ve seen around recently — it adds that Mashable style social bar — one that moves down the page as you do, reminding visitors whilst they’re reading that you know, you should share this. Some might consider this a bit intrusive, but for me, it’s a good solution.

You can just install the plugin as normal and once you’ve done that, you’ll find loads of social networks for you to choose from. To keep the size down, I just went for three: Google+, Twitter and Facebook.

I wasn’t entirely happy with the styling; I didn’t like having the floating bar stick out quite so much, so I just did a couple of simple CSS tweaks to make the bar fit in a bit more with the overall WPShout look. When I get around to it, I’ll be integrating the Digg Digg CSS file into the main WPShout stylesheet to avoid having to load an extra stylesheet just for social buttons.

After seeing traffic drop after not having these social media buttons, I wasn’t going to take any chances with this one,  so I added another set of buttons at the end of posts. Just a simple affair: the same three buttons in a little box.

As Digg Digg has the option to just drop these buttons in, I just used the plugin, although social media sites’ respective Developer sections will have the appropriate documentation.

Using the plugin, though, it was just a case of:

Which was, thankfully, super-simple. I then just dropped some styling on, too, to create that little box you see before you.

So go on then, try it out! Let me know what solution you go for in the comments.