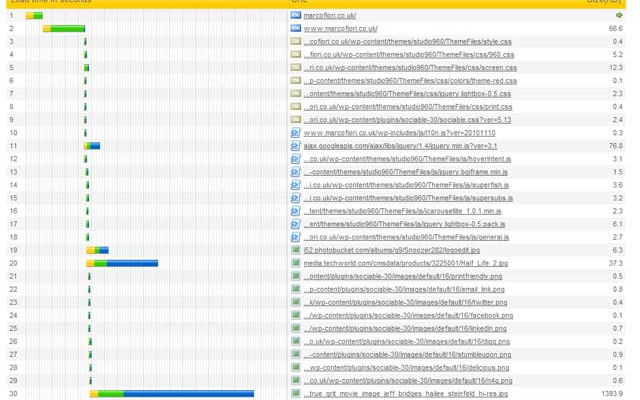 In this post we’ll look at some ways of making WordPress faster. As a bit of an experiment, I’m using a load of screencasts in the place of writing – let me know your thoughts in the comments.

First thing to do is to test your speed, using Pingdom. A quick screencast compares two sites — the fairly heavily optimised WPShout and Marco’s blog, a normal WordPress blog running a premium theme.

As the screencast shows, if you’re getting a lot of stuff off the server or using a lot of HTTP requests, to use the proper term, your blog is going to take longer to load.

Cut the number of requests you make

So we’ve established that making lots of requests is going to make your blog slow, but how can we reduce the number of requests? Combine and minify! Google’s minify is a handy bit of PHP which you can install on your site and will combine all your CSS and JS into two files and then compress the files to give you two tiny files!

Follow the instructions on the minify site to install minify and then see the screencast below to see how you can combine all your files into one.

Images are often the big culprit: you need them but they take up huge amounts of space! Images can be optimised though, as this next video shows.

We’ve established that having fewer, smaller files is a good thing. But what if the problem is caused by these files downloading slowly? In that case, you’ll want something called a CDN, or content delivery network. It’s essentially a way of distributing your files around the globe to make them load faster. WPShout runs WPCDN for all its images and it does make a difference; I’d recommend you check them out.

A post on WPQuestions inspired this post. Someone was looking for suggestions as to why their site was running slow and the answers were impressive! Chris Bavota had some good optimisation tips and some other folks followed up with some